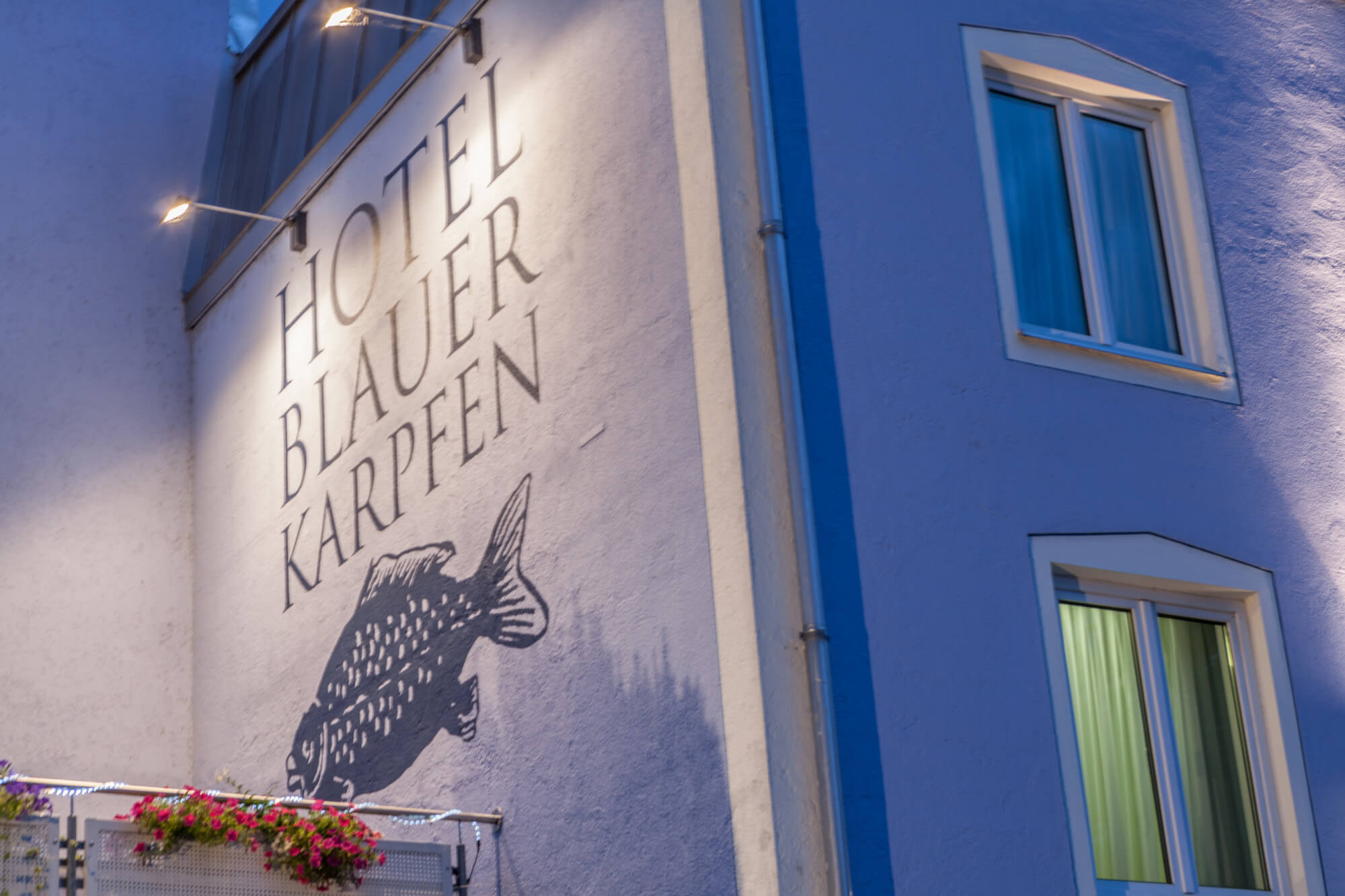 Traditional Tavern and Hotel in Oberschleissheim

In 1930 the German author Hans Brandenburg wrote: “If Munich wasn’t Munich, every quarter of an hour a car would leave Marienplatz to go to Schleißheim in times of holidays …”. And thus he provided proof in the same book titled “Festliches Land”.

It says “Schleißheim is a name such as Sanssouci and Schönbrunn, name of a deliciousness beyond the gates of a metropolis…”. And it is on this central axis of the Old and the New Palace of Schleißheim where the tavern “Blauer Karpfen” at Dachauer Strasse is located and which had been acquired by the couple Kaspar and Maria Maier for 30.587 Goldmarks in 1879.

The name “Blauer Karpfen” (blue carp) derives from the canal named the "Schleißheim Canal" that flows by the restaurant. It was built by the Elector Max Emanuel in the 17th century as a part of the pompous court garden.

In early 1917 a “world-famous” artist was a guest in the tavern: Paul Klee. The pioneer who was stationed at the “Königlich-Bayerische Fliegertruppe” (Royal Bavarian Flying Corps) in Schleissheim mentioned in his diary of January 15th that “once more I ate at the “Blauer Karpfen” and brought order to my room”.

The year 1929 represented a milestone for the hospitality business. The builder Josef Simek received the order to demolish the old tavern and construct a new building with a hall and a butchery. From this day on and for the following decades all large events of Schleissheim took place here, from carnivals, parties, the “Josephifeier”, May dances to theatre performances, Kindergarten celebrations, public meetings and Christmas parties.

The guest rooms were very popular among the many guests and locals. This was documented by a note that locals and regulars had hung up above their regular’s table:

Dahoam sans nia z’Haus
Aba do sans wia z’Haus!
(At home they’re never home, But here we are at home!)

Another milestone in the history of the “Blauer Karpfen” was the construction of the Hotel in direct neighbourhood to the tavern. After the Second World War, the period of the economic miracle, the demand for guest rooms in and around Munich boomed. On 29th of October 1968 the Spiritual Councillor Josef Kranz and the Pastor Paul Stich inaugurated the 72-bed hotel.

When the Bavarian capital of Munich was then chosen to open the Summer Games of the XX Olympiad the complete hotel served as an Olympic Training Centre for the ZDF television channel from August 14th to September 11th 1972. Many athletes, world champions, and Olympic champions stayed at the hotel before as well as after the Games.

After purchasing the tavern Tafernwirtschaft in the second half of the 19th century the “Blauer Karpfen” has been in family ownership. The first owner was Kaspar Maier followed by Franz I., Franz II. and then Franz III. Gerhart Maier is the current owner of the Hotel since 2007 is actively assisted by his daughter Bianca since 2013. Like his predecessors, he always endeavours to set new standards in comfort and technique in both the restaurant and the hotel.

Due to the fact that of the hotel business is very time-consuming, in the 80ies of the 20th century it seemed advisable for the owners of the “Blauer Karpfen” to give up the additional restaurant business. They had found a worthy successor in a Greek restaurant owner, who has also been very popular for decades. The new Greek Tavern would be given the name “Poseidon” which derives from the Greek God of the Sea, thus completing the circle of the origin of its name “Blauer Karpfen”.

Book your Room and
Check Availability